Its About People & Bringing People Together

About Pride in Plymouth

Pride in Plymouth is a non-profit community organisation that brings people and groups together to celebrate and promote the diversity that exist within the Lesbian, Gay, Bisexual and Trans communities in Plymouth. The information, advice and support made available through our events and the pride in Plymouth network with our website as the hub allows us to advance community education so we can work together to eliminate discrimination in relation to gay, lesbian, bisexual and transgender (lgbt) people in Plymouth, the surrounding area and further afield. We are more than a single event - We work through the year collaborating with many supportive organisations and we actively support campaigns that aim to improve the lives of LGBT people locally, nationally, and across the globe. We believe in the Global Village' - "An attack on one is an attack on us all"

Pride in Plymouth volunteers presented Plymouth’s first proper outdoor ‘gay pride’ in 2012 that was held in Devonport Park – the event was a huge success with over 1,500 people attending. We returned to Devonport Park on the 20th July 2013 with an even bigger event. We are continuing to build on the solid foundations laid so that Plymouth can enjoy a sustainable annual LGBT festival that will be as big or even bigger than Prides held in other similar sized cities in the UK. 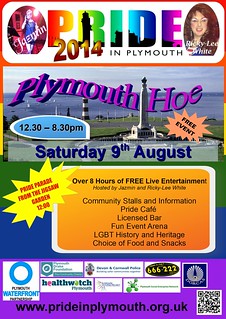 We are very excited to announce that the summer Pride 2014 will take place on Plymouth Hoe. Also this year will see the city’s first proper PRIDE PARADE through the City Centre to the Hoe.

The Parade will depart from the Jigsaw Garden at 12:15.

The Free outdoor festival on Saturday 9th August, from 12:30pm to 8:30pm, will include musical entertainment by local artists and entertainers, business, food and trade stalls, community and voluntary groups will also be promoting services and advice shops.

The Hoe which is the centre of our waterfront city will provide one of the most stunning locations for Pride in the UK.

Pride in Plymouth volunteers are very keen to develop the festival as one of the region’s biggest annual events, celebrating diversity, in one of the most amazing waterfront cities in the world.

The space we have chosen is the green city centre side of the Hoe War Memorial this will enable us to build on the successful format used in Devonport Park for the last two years.

The stage, sound and lighting will be provided by a professional events company, we have also earmarked an arena space which we can use for activities such as a dog show, drag race and other fun and games.

Also new for 2014 is the Pride Cafe and we are asking people to donate a cake, cup cakes, buns and biscuits which we can then sell on the day. Lots of prizes to be won for home-made cakes and treats.

We have teamed up with Plymouth based media company Dorcas Media to help with PR and publicity.

“We are looking for support from local businesses that would like to take part and a great way for employers and firms to show how much they value diversity and getting people to take part in a fun and lively family day out.”

If you would like get involved in this years exciting Pride Festival on the Hoe.

Events we have attended and supported increasing visibility of LGBT life in Plymouth:
[wowslider id=”23″]

Some of the events we have organised:
[wowslider id=”22″]

One thought on “Pride in Plymouth – Bringing People Together”

Please support our projects and events by making a donation.

Your Donation will help us to continue to deliver FREE events for all to enjoy including the Award Winning Summer Plymouth Pride Festival.

Support us with a Donation

If you enjoyed the FREE Pride festival on the Hoe or would like to support our on going work in the city then please consider making a donation no amount is too small.

We are Located at: